As I’ve noted before the sense of civic duty is soaring in Ukraine. I know a guy who returned from Maidan to organize his neighborhood for some minor civic projects, and another who is a building a corruption-reporting platform.

It’s beautiful, of course, but my fear is that the will to be honest fades. I would rather see Ukrainians focus on local autonomy and privatization — two things proven to reduce corruption regardless of people’s will. When incentives are structured correctly, willful kindness and discipline become much less important.

Below is a picture posted near a Lviv Institute, shaming a lecturer for taking bribes. If education was privatized, institutes wouldn’t need such policing. Their owners would either enforce standards for lecturers/employees or get out competed by people who do. 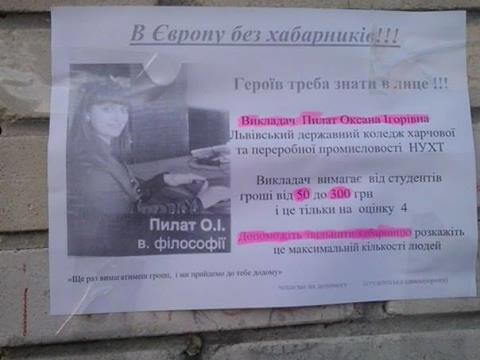