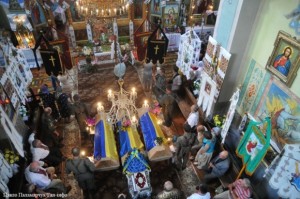 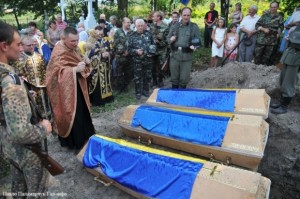 First, some context and empathy for the soldiers:

The Galician SS division formed in 1943 when it was already clear that the Nazis would lose the war. Approximately 15,000 young men, mostly from Western Ukraine formed the division. The division was unique among SS division in that it formed with two stipulations: 1) they would only be used to fight the advancing Red Army. 2) they were allowed to have priests in the division. The latter is relevant because the first thing the Red army did when it captured Galicia in 1939 was slaughter all the priests (and deport all the seminary students to Siberia).

I regard their effort as a mostly heroic effort to resist the Bolsheviks who, long before WWII even started, had slaughtered many more innocent people that the Nazis ever would.

I know my grandfather, a Ukrainian patriot who did time in Poland’s Bereza Kartuska prison (and may have survived only because the guards abandoned the prison upon the Soviet invasion of 1939), advised young men from his town against joining the Galician SS division, not because it wasn’t a noble cause, but because their effort was futile. (Later that year, it was my grandfather’s Jewish neighbor who warned him, with only minutes to spare, that the Bolsheviks were coming to take him away.) Indeed, most of those young men died in the battle of Brody, which in the sweep of history was a minor speed bump on the Red Army’s road to Berlin.

“Of the approximately 11,000 Galician soldiers deployed at Brody, about 3,000 were able to almost immediately re-enter the division. Approx 7,400 were posted as ‘Missing in combat’ . . . . The 3000 survivors of the Galician Division were used as a nucleus for the rebuilt 14th SS division. Those that were captured were either executed or sent to slave-labour camps.”

I believe in honoring these men, but the Nazi uniforms are in poor taste. The Galicians were not loyal to the Nazis, they were loyal to Ukraine. They need to stop being so stupid about the symbols they choose. Also, from a utilitarian perspective, Nazi dress-up parties only fuel the false legitimacy of the Soviet Union, of the imperial ambitions of Putin’s Russia, of Ukraine’s Party of Regions, and of the bullshit prosecutions and show trials of innocent men like John Demjanjuk.

More broadly, this reburial demonstrates why Ukrainian history is so difficult to read and discuss, but maybe that’s why I’m attracted to it. If all the information around me was honest, true and complete, I’d have to find a new hobby.

Comments and contrary opinions are welcome.